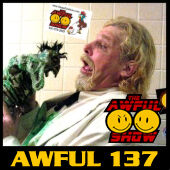 Yeah, we talked a lot in the opening segment, and yeah, we let the phone games with Dan run a little long too. But can you blame us? It was a good time. And when you toss in a fun interview and a totally Troma SYN you can't help but stay for the full ride.

Lloyd Kaufman of Troma Entertainment, a living legend and a fun old perv pushed Leno aside to spend some time with the Awful fam. And to top it off, he propositioned Joel in a way that will speak to your soul. website | myspace

Keyz hosted a game of "Screw Your Neighbor" titled "The Stars of Tromaville".

All music in this episode was taken from the Poultrygeist Soundtrack