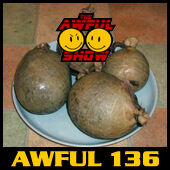 There was so much to talk about this week between what's going on in our lives and the foul dietary habits of the Brits that we hardly had time to squeeze in anything else...but we did. We also included the news, SYN, and the next installment of the ASS contest -- all for the same great low price!

Keyz hosted a game of "Screw Your Neighbor" titled "A Double Dose of Crack(ed)" with 2 segments: "The 10 Best Sarcastic Black-White Buddy Cops" and "Guy Movie Classics (And Why They Secretly Suck)".