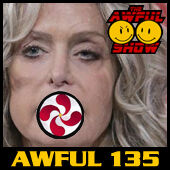 There was a fun discussion, a good time with the live audience, and a SYN that speculated on how many heartbeats some...shall we say "living challenged" entertainers have left.

Lexington & Whatevski from Hand Solo Records stopped by to talk up their musical artistry and reaffirm our belief that Canada can be just as "gangsta" as you could hope. See their new video before the rest of the world here, and leave a comment mentioning The Awful Show to get free stuff from them and us. And don't forget to check out the album "Pregger Can't Be Choosers" that drops on 1/29/2009. website | myspace

Keyz hosted a game of "Screw Your Neighbor" titled "YOU'RE ALL GONNA DIE!!" about people who top the 2009 dead pools.