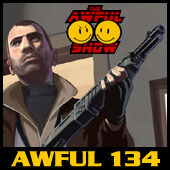 We actually went into this show with a plan. And then we talked to Captain Dan. And then Captain Dan talked to Nerraux's Romanian scammer friend Vasili. And then we forced Vasili to play SYN. We're not sure if you'll think it was funny or not, but we laughed our asses off.

Keyz hosted a game of "Screw Your Neighbor" titled "You Don't Know Dick" about movies Dick Miller has appeared in. No one knows who the winner was.