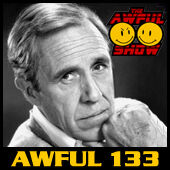 After a week off, we were all back live and it felt good to power up the mics and spew drivel into them for a full two hours. Seriously, there was a lot to catch up on and a lot of new listeners in the live chat to help motivate us. Back that with a Top Douchebags of 2008 SYN and you've got a winner.

Ernesto from Team Illuminati stopped by to talk about something, but we're not sure what it was since we talked mostly about grunge. Check him out, though. The music is unique and cool, and he wants to give you free stuff! And if you leave him an iTunes comment and tell us about it, we'll send you free stuff as well.

Keyz hosted a game of "Screw Your Neighbor" titled "Name That Douche - 2008 Edition" with the help of Mad Magazine's last issue of 2008. Tha Mike was the winner.